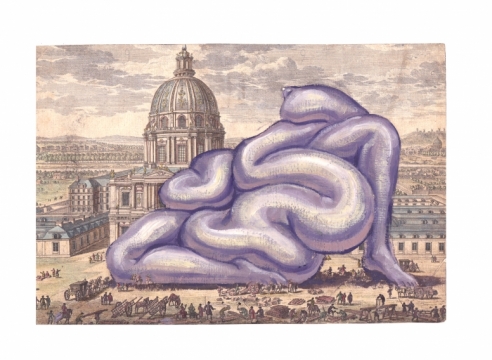 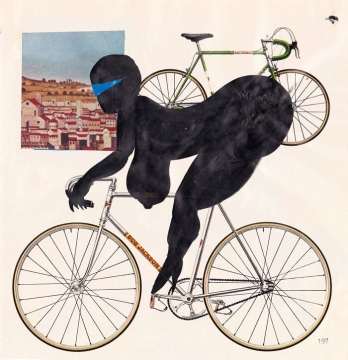 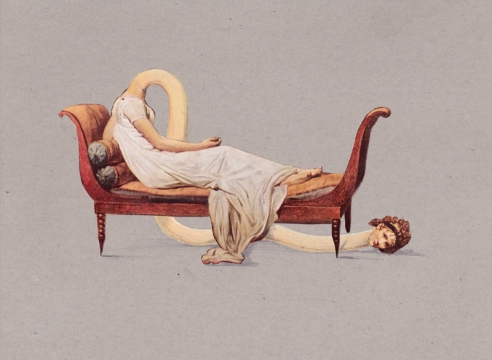 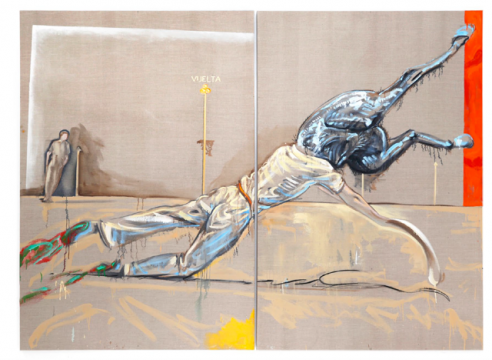 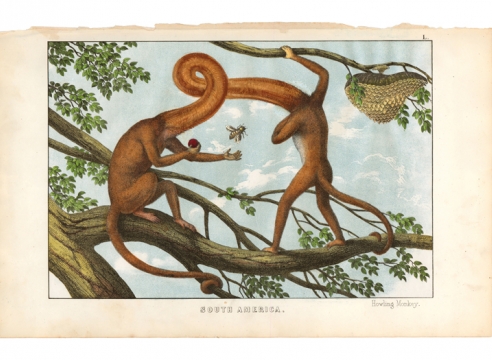 Daniel Horowitz (born in New York, 1978) works in painting, drawing, collage, and installation. His art is characterized by a unique combination of realism and surrealist abstraction. Daniel employ an associative logic, whereby disparate subjects are thrown together into impossible landscapes that are nonetheless psychologically cohesive. Through dissonant figure pairings and Freudian fluency in our collective symbolic lexicon, Horowitz conjures up what cannot be visualized into something visible. His paintings suggest a narrative but this promise dissolves into ambiguity. Originally inspired by Surrealism and the Polish Poster School, he developed natural interest in the so-called New Leipzig School, known for mixing surrealism and realism. Horowitz’s work has been the subject of international solo and group exhibitions - from New York, Los Angeles, Mexico City, Warsaw, Berlin, Leipzig, Paris to Split, Barcelona, and Montreal. He graduated from the Art Center College of Design, Pasadena, CA (2001).

I paint the trauma of everyday life. Through a process of resurrecting the obsolete, I reimagine a more authentic reality. My practice brings drawing, painting, collage, and installation in confrontation with historical material. My father is a holocaust survivor, and much of my life I have spent trying to reconcile the fundamental truths that define human behavior. By repurposing images from society’s detritus, and lifting the veil on expired soviet encyclopedias and american lifestyle magazines, combined with an intuitive associative logic, I expose our contemporary reality with all of its social anxieties and displaced identity. I consider all printed media to be propaganda, in other words, someone’s official version of the truth, and as I peel away the surface I attempt to unlock that which binds us all together in order to dispel inherited trauma.

My current art practice is largely derived from a diurnal drawing series I completed in 2012, 365. This project, cut from old accounting books and ephemera, brought to life with ink, paint, and collage, now serves as a taxonomy and database of 365 ideas and techniques that I continue to explore in each subsequent project. 365 also represents a major departure from my earlier work as an editorial illustrator. I had spent ten years cultivating a skill-set of translating abstract texts into concise coherent visual metaphors for The New York Times among other notable clients. I became fluent in the language of media in its ability to educate and manipulate. This fluency allows me to draw on our collective visual codex with extreme precision and effectively engage only to then subvert. 365 also represents a pivotal return to my original passion as a painter.

Recently I was commissioned by Claude d’Anthenaise and the Musée de la Chasse et de la Nature to produce a body of 20 works combining realism and surrealist abstraction in an exploration of pseudo-historical documentation. Retelling a fictive safari expedition, I manipulated 18th and 19th century engravings to explore the art of hunting, as a metaphor for man’s quest of self. The objective is to successfully manipulate the image by harnessing the given style and technique of the antique engravings and watercolors, and confuse the viewer as to what is authentic and what is intervention. By seamlessly integrating the counterfeit historical work back into the permanent collection of the museum’s many exhibition rooms among many other genuine historic arifacts, the exhibition confuses what is “museological objectivation” and “ontological engineering” to cite the philosopher, Vincent Normand.

Questioning the ontological role of the museum, the exhibition, and the historical artifact is also at the heart of the immersive exhibition, Totem & Taboo, Tillou Fine Art, November 12, 2016 - January 21, 2017, including paintings on historical engravings and photographs, as well as on linen stitched with reappropriated textiles alongside tribal art from various private collections. The visual image has been the dominant mode of communication for the 20th century, and with the help of photography has greatly contributed to the Western perception of the ‘other.’ Indeed the binary of self and other is perhaps one of the most basic theories of human consciousness, however, I propose that there is great fluidity between the two and perhaps they are interchangeable one and the same. My suspicion is that the fear and fascination with elements unlike ourselves, are just expressions of elements within one’s own psyche as described in Freud’s Unheimlich, and that can only be unveiled through a voyage into the unconscious.

Why are some of the foremost collectors of ‘tribal art’ also leading psychoanalysts? What is the relationship between psychoanalysis and ethnographic culture of the 20th century and what can it tell us about the precarious times we now live in? I am intrigued by the representation of mankind and his states of consciousness in traditional tribal artworks in contrast to our present ambiguous post-colonial selves. After being introduced to the tribal art collection of dealer, Alan Steele, I envisioned creating a body of paintings that could offer a counterpoint to key sculptures from his collection in the form of an exhibition. My purpose was to draw a clear line between Marlow’s voyage up the Congo river in colonial period masterpiece, The Heart of Darkness, and the introspective tradition of Freudian psychoanalysis.

Totem & Taboo, the 1913 essay by Sigmund Freud, draws an equivocal line comparing the mental lives of savaged and neurotics. Freud believed that in order to understand our own neuroses one must look towards primitive society. Primitive only in terms of technology, the psychic lives of traditional societies are incredibly rich and the evidence of this can be easily observed in the many artifacts that were brought back to the west by missionaries and anthropologists. I knew that Freud’s assumption was wrong, however, what became absolutely clear was the dichotomous marriage of psychoanalysis to animism, the overarching belief system of tribal society. In animism, the universe functions as an externalization of the human psyche. These objects fetishized in the West as tribal art, were largely ritual tools to appease the spiritual forces at play in the external world. These objects served to restore order to thenatural world; the weather, human fertility or agriculture, and virtually every aspect of existence, if not tended too through ritual intervention would take revenge on the unsuspecting human. The Shaman in traditional society was the interlocutor between the physical and spiritual worlds. Since the Enlightenment, Europeans have turned inwards towards subjective experience and away from tradition. My assumption is that the role of the psychoanalysts and the treatment of mental aberration through analysis is a perfect metaphor for the shaman and ritual activity in traditional culture. However, today the forces that need to be tamed are our own thoughts.

As I began to study this convergence, Werner Muensterberger, a professor of “ethno-psychiatry” and preeminent collector of primitive art in the 20th century, became a case study. Muensterberger is a fascinating example of an individual whose quest of understanding human consciousness straddles the traditions and belief systems of both west and non west. Photographic plates from his book, Sculpture of Primitive Man, serve as grounds for a series of paintings called Tribalphilia, painted directly onto pages of the book and interspersed throughout the exhibition. This sort of intervention directly onto historic photographic or printed material is a hallmark of my process. Many of the paintings on linen are also derived from anthropological photography as a source material. Images that once posed as fact, having greatly contributed to the Western perception of the ‘other,’ have been reappropriated and subverted in order to exploit the perceived dissonance between the observer and observed. Ultimately, the aim of the exhibition, Totem & Taboo, is to function as a group exhibition, where many of the protagonists are anonymous, and the convergences between aesthetics and cultural identity are bound in a domestic context as the gallery dissolves into a surrogate home for the visitor.

Questions raised by the exhibition are further explored during monthly Saturday Salons, a platform for cross-disciplinary conversations and collaborations including lectures, performances, concerts, and panels by leading experts in their fields curated by Ella Marder including author, Lawrence Weschler, psychoanalyst, Jamieson Webster and philosopher,Chiara Bottici. To accompany the exhibition, a book is in the process of being published with a catalogue essay by Francois Michaud, chief curator at the Musée d'Art Moderne de la Ville de Paris. 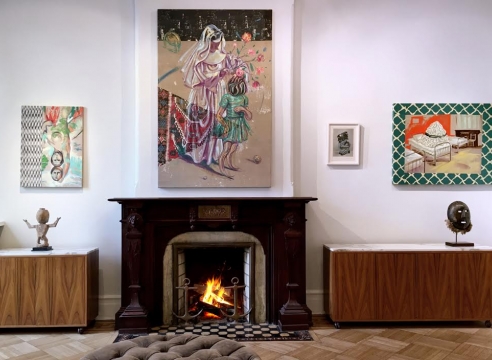 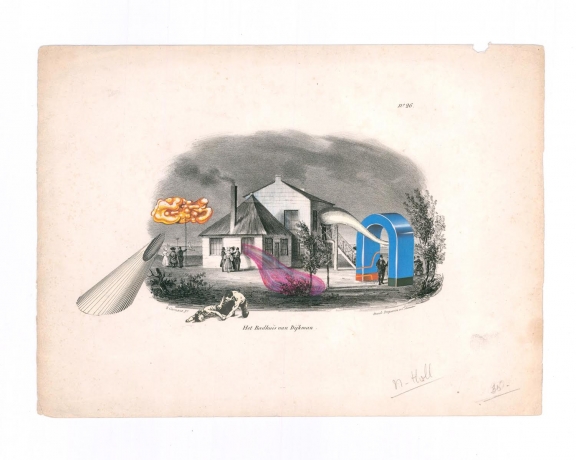 Saturday Salon 2 - The Philosophy and Psychoanalysis of the Image

The Philosophy and Psychoanalysis of the Image: Psychoanalyst, Jamieson Wesbter in conversation with philosopher, Chiara Bottici

Noted philosopher, Chiara Bottici, and author and psychoanalyst, Jamieson Webster, will engage in a conversation about the history of images. Is the image more real than reality, or the epitome of fiction? Is the image politically conservative or subversive? What is the difference between what is imaginary in an image and what is creative imagination? From Rousseau to Freud and Jung, from Guy Debord to Castoriadis and Jacques Lacan, this conversation will engage with the question of the image as it relates to art and other forms of culture. 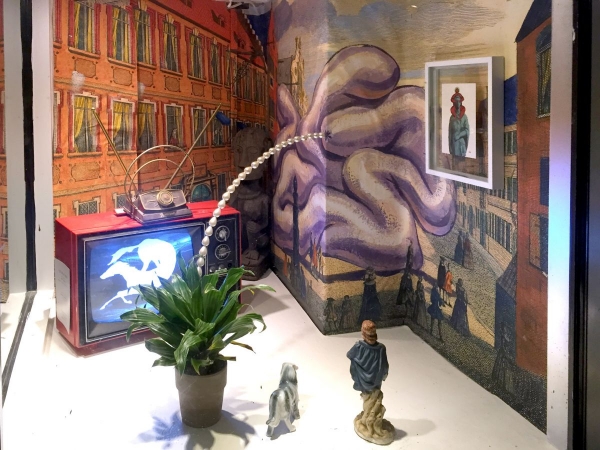 Concurrent to the Totem & Taboo exhibition at Tillou Fine Art, there will also be a site-specific window installation by Daniel Horowitz on view at the 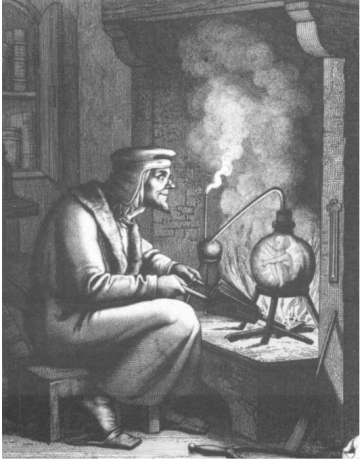 Lawrence Weschler's talk LEAD INTO GOLD, will trace the millennia-long passion for Wresting Something From Nothing, from Alchemy through Finance, which is to say from philosopher’s stones through subprime loans as part of a series of salons in conjunction with the exhibition TOTEM & TABOO. 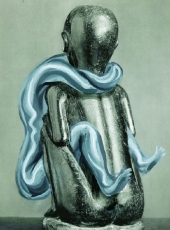 Concurrent to the Totem & Taboo exhibition at Tillou Fine Art, there will also be a site-specific window installation by Daniel Horowitz on view at 223-225 West 10th St., NYC, from October 26 - December 3. 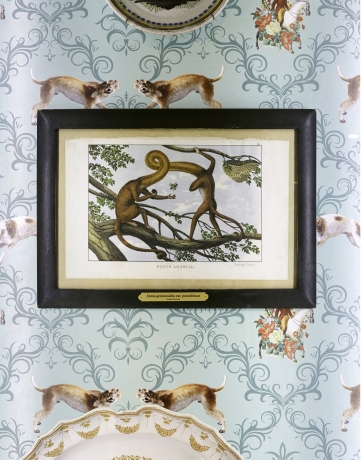 Paris, 2016 - In this body of twenty works on paper commissioned by the Musée de la Chasse et de Nature in Paris, Daniel Horowitz dives into the exercise of pseudo-historical documentation. Retelling a fictive safari expedition, he subverts original eighteenth, nineteenth and early twentieth century artifacts to explore the art of hunting, as a metaphor for man’s quest of self. 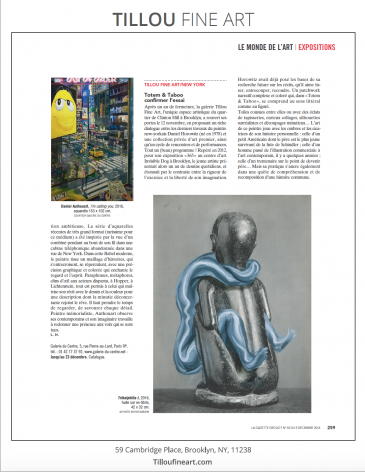