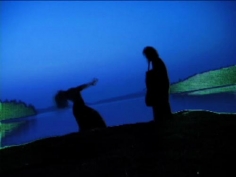 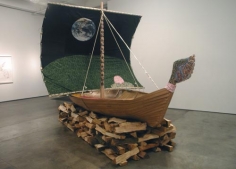 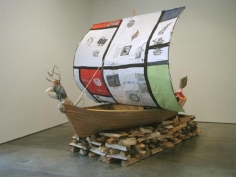 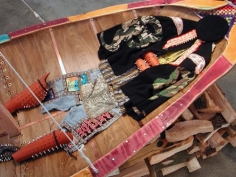 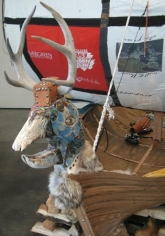 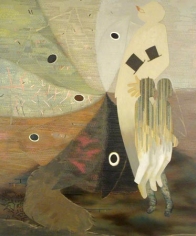 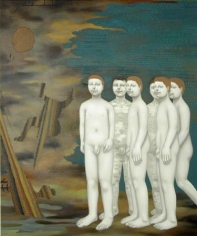 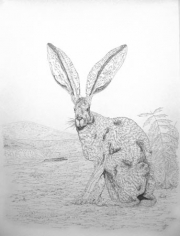 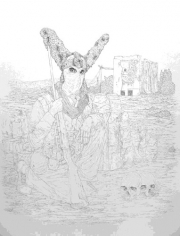 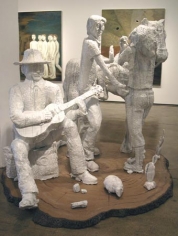 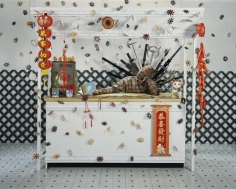 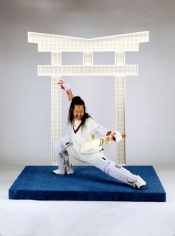 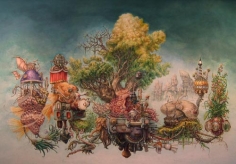 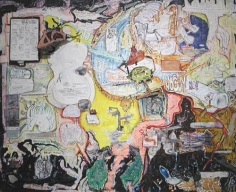 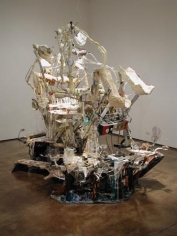 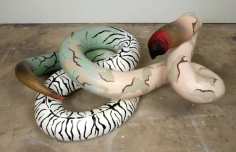 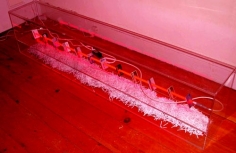 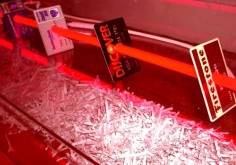 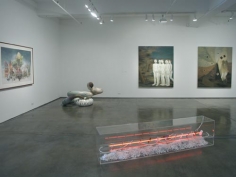 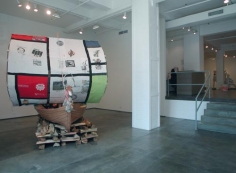 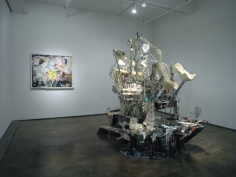 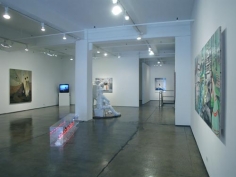 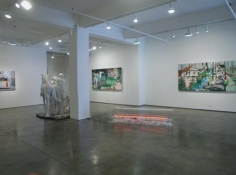 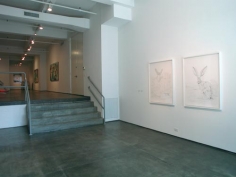 BEHOLD the truth in art. Repent your aesthetic transgressions. Stave your misguided visual temptations. The artwork in Relentless Proselytizers dares to make you a believer. The twelve artists gathered here would like to make you a disciple of their worldviews. Their tactics are zealous and at times over the top. They realize that the divide between faith and belief is a sharp and necessarily thin one; not content with an agnostic pose, a tendency toward baroque overcompensation persists. From Jay Batlle's row of credit cards skewered with a neon rod, which draws, overdraws, or overdrafts you into his world of debt-dependency, to Matthew Day Jackson's Viking burial ship--a sleek nautical metaphor for the interment of one's youthful obsessions, no curious onlookers will be left behind.

Are you ready to be converted? Brought into the fold? Besides your punctual attendance and rapt attention, the requirements for novitiate status are surprisingly few. You must, however, be willing to share Gina Dawson's enthusiasm--no, call it infatuation shading into a crush--for John Ritter. The late actor is depicted here by Dawson in a tableau with his father, the Country & Western star (and relentless proselytizer in his own right) Tex Ritter, and his trusty horse, White Flash. They are joined by Dawson herself, who sits on the Three's Company star's lap in dreamy-eyed supplication. Instead of Remington's bronze, Dawson uses a faux marble finish. All the better to neo-classically memorialize a "classic" sitcom and physical comedy genius.

Need more inspiration? Gaze at the allegorical paintings of Haavard Homstvedt, whose generic figures and implied narratives show us that the everyday may be unique, that the simple may be complex, and that meaning can be found in what may at first appear to be the meaningless.

Still not ready to succumb? Perhaps SunTek Chung can be your temporary shepherd. The Korean-American photographer has outfitted himself as a cricket player in a kung-fu ready pose. He stands in front of a Pagoda altar tricked out in a pleasant Laura Ashley print, clutching his bat like a kendo sword. Worlds collide, not least the neo-colonial sport of cricket with the pop-imperialist fascination in all things Hong Kong action. Chinese, Japanese, Korean, American, Indian, and Pakistani: Chung is a nun-chak thumping photographer in high Pentecostal fever.But alas, do we sense some wavering on your part? Perhaps you're stuck at the crossroads between Paradise Lost and Paradise Regained, nudged out on the shoulder of the road as you try to merge with the righteous rush hour traffic en route to the Rapture. Fear not. Elizabeth Huey's avenging angels carve a safe path into a parallel dimension that is neither concrete-clad terrestrial nor floating cumulous bluff. In fact, a warm Tudor House overlooking gaseous swamps and roiling brooks awaits you on a steep hill. Mystical electronics provide surveillance. Cobbled together Wurlitzers emit an analog trance. And the signal is about as clear as two styrofoam cups and a piece of string when her argyle-clad guardians of the forest send out an intruder alert. It's brains over brawn, though, in a world where the only helpful technology is a pigtailed sentry's painted neuropathway--her illustrated synapse.

But even Huey's Gothic Valkyries in flowing gowns (and knee-high socks with Manolo sling-backs) may not be enough to protect you from the snake in the grass, a shape-shifting serpent offering up a confusing smorgasbord of identity options. Mod, Punk, Preppie, illmatic Bling-King, or camo-clad embedded human sacrifice--the choice, albeit niche-marketed and product driven--is yours. But why buy the snake oil, Ben Beaudoin seems to ask, when you can have the snake itself? Beaudoin has literalized the menu of identity options by "texture-mapping" them, if you will, onto a curling, slithering abstract form. His interest? Identity blending--wallflowers, the Organization Man, the woman in the crowd, human infantry--and identity as it desperately distinguishes itself from the mainstream: replicant suicide girls doing some soul searching while searching for an actual soul, Indie-Pop nano-bots changing their footwear before the last keyboard blip and cymbal crash signals the end of the party.Perhaps then, you will follow the lugubrious music in Chris Rodrigues' video-dirge of a sole cellist and exotic dancer silhouetted against the pixilated sky on a shadowy mountaintop. Forget ceremonial rain dances; here, the choreographed drama spikes upwards until a frenzied climatic finish takes you into the light of the distance beyond. Conversely, you might end up imagining yourself under the light darkly on Jesse Bercowetz's & Matt Bua's ghoulish examination table, aptly subtitled "The worm is the gateway slice to psychosomatic reversals, amputated histories and architectural placeboes--it's easy to get dusted in a shamanless fixer upper." Their operational theater is the nexus between "D.I.Y. surgery and makeshift body repairs", and "a ghost on life support of crust and gel".Still more visionary apparitions and painted inspirations might be found in Ben Blatt's phantasmal garden of otherworldly distortions and delights. Hieronymous Bosch meets Baron Munchausen in celestial terrarium-like atmospheres of outer planetary rings--a kaleidoscopic celebration and metamorphic amalgamation of Blatt's introversions and fanciful fixations that you might wish to explore. In stark contrast are Adam Helms' desolate environments sparsely populated by desert rabbits and mercenary soldiers of fortune. Amid the dust and rubble, attenuated figures bend to survey the wreckage, plot their coordinates, and prepare to take a bead on the irradiated beasts lurking behind the nearest windswept mound. They exist in a fictional world of drawings, but one that seems familiar--one with a political past and current conflict, one "populated with empathetic characters and the artifacts of a subcultural pathology", and one where perhaps beliefs are long defended and ideologies continually promulgated.