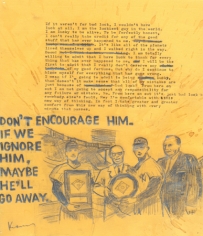 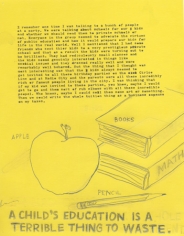 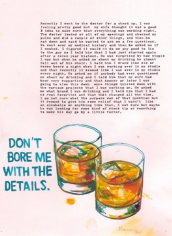 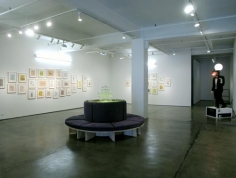 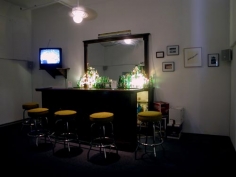 "In a perfect world I would be one happy mother fucker," David Kramer declares in a drawing of a beautiful woman posing next to a convertible. "I want to know how the other half lives," he announces in another of a six-pack of Bud with three cans missing. Such desire is the driving force behind Kramer's comedic drawings, videos, and sculptures. Perceived inadequacies at work or awkwardness at parties are magnified by juxtaposing his self-deprecating stories with the clichéd expectations of success and splendor showcased in the unreal world of flashy advertising and popular culture.

This exhibition includes over 50 of his trademark sardonic drawings, three sculptures and a video work. The Gallery's back viewing area is converted into "Old Man Bar", a tableau of a gritty local lounge where long afternoons can be wiled away drinking beers. Playing on the TV behind the bar is the 1940's style DVD "Million Dollar Moment", Kramer's autobiographical parody of the film classic "The Fountainhead", which reenacts the true story of a mix-up in names that accidentally brought Kramer to the attention of a prominent Chelsea gallery. Other sculptures include a life-sized enlargement of the common bar figurine of a hobo leaning against a lamppost, and a Las Vegas inspired circular settee with a working fountain of stacked champagne glasses as its center.
​

Kramer's art as a whole demonstrates the disparity between the artist's everyday reality and the ersatz glamour and glitz of the elusive "good life", reminding us that the desire for an idealized success is a constant benchmark against which we measure our actual achievements.

David Kramer was born in New York City. His artworks and performances have been appreciated across the United States, Canada and Europe.